When I first realised I needed a change I knew it had to be big. At first the idea was to just change jobs, shake the mind by starting something new. But this was a good job and it hadn’t worked, so what was to say it’d work next time.

I realised I had to leave London. I thought about moving back to my parents. But that felt too much like a reset instead of an actual change. I needed something different, something like an adventure. Something that would well and truly throw me out of this strange rut I had found myself in.

A writer who doesn’t write. The worst of both worlds.

If not London and if not the refuge of my parent’s house then where?

A motorcycle camping trip to Scotland.

Something I’d always wanted to do but always found excuses not to.

Ok but now I actually had to do it.

A slow way round

The goal was to take as many B roads and as few motorways as possible.

Three days seemed a fair shout, about four hours of riding a day. A slow meander through the British countryside. Chiltern Hills, Cotswolds, Peak District, Forest of Bowland, Lake District, then up the A7 to Edinburgh.

That was the ‘plan’ and before I knew it, the day arrived.

I began later than I wanted and started quite slow. Laden with gear, it took a moment to adjust to the weight. But it was a big bike and one designed for such a venture. Pretty soon I had gotten the hang of it.

My GPS was my phone, meaning I didn’t use it until I really had to, meaning I did get a little turned around a few times early one (and during one U-turn made the mistake of braking, thus almost toppling the bike only an hour or two into the ride… it wasn’t the best of starts).

But soon I got the hang of it and rode through the Chiltern Hills and into the Cotswolds. Through tiny stone towns I meandered until I stopped for lunch just before reaching Birmingham. A peanut butter sandwich and a granola bar.

Then it was onto the motorway to bypass the big city before jumping off again right on the southern end of the Peak District and riding through the little roads. It was here I needed my GPS and it was here my phone died. Right after riding past Thor’s Cave.

I pulled over and got the portable charger out. A few minutes of studying the map allowed me to jump back on and head to my campsite. This was the longest ride I’d done and I – and my arse – was shattered.

I got unpacked, made myself a simple meal over my single person camping stove, and crawled into the tent. It was only just getting dark and I had some reading time before drifting off to sleep.

A short one, this one.

My story, I soon learned, was both common and unique. To recap, I was an artist not partaking in their art. A professed artist. And I soon discovered, upon telling friends my plan to leave the city of London and start anew somewhere else, that I was not the only one feeling this way.

One friend had been working in the city for years and only recently found a job somewhat in line with his desired profession. Another had just, after many years in the city, begun receiving enough commissions to cut down her hours at the coffee shop where she worked. Evening and weekend artists, I soon realised, where quite a common thing in the city.

I found among these artists the most common response to my saying I was leaving was a sort of reluctant ‘well that makes sense.’ A shrug, as if it were the most natural thing in the world, mixed with worried look, as if it were entirely unnatural.

The second most common response was a sort of glazed look of incredulity. An utterance of shock and little else – sometimes accompanied by a ‘why would you do that?’ To avoid diving too deep into explanation – I was still myself freaking out about the journey – I would often change to subject.

The third most common, and by far my favourite response, was a genuine exclamation of excitement. It was not a questioning of my insanity or an inability to understand what I was thinking. It was a sincere happiness for the adventure I was about to undertake. And it made my own thoughts about the future that much calmer.

Because I knew what I was doing was a little insane. And I often asked myself why I was doing it.

And I also knew in spite of all this that it was right. Or at least I knew I had to do this – whether it is right or not remains to be seen.

I guess what I’m trying to say is if you have a friend who decides to go on a random and overwhelming adventure, try to sound excited, try to support them. It’s among the more reassuring responses you could give. 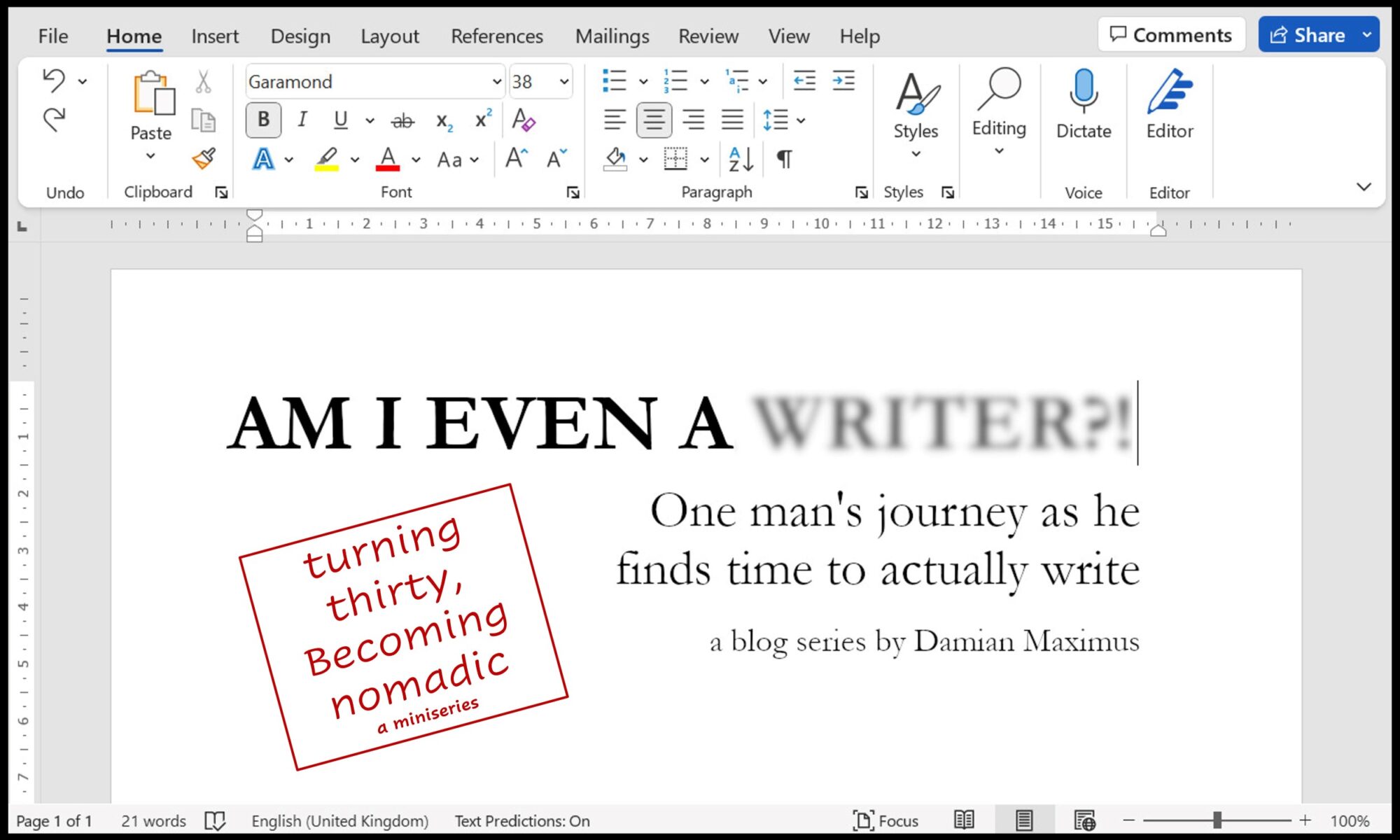 The adventure began three months before my thirtieth birthday. In London.

I had been renting a little room on the outskirts of the city, keeping costs as low as possible, working part-time and writing part-time. I had so many projects on the backburner and I was determined to finish them all.

I had a good job in hospitality. One that actually paid living wage. It should have worked.

I realised I had a choice.

I could either switch to full-time work and not write (I know there are people out there who can come home from work and bust out a few thousand words but after nine-hour shifts standing up and an hour commute each way I was done. I need the day, or at least a chunk of the day, dedicated to writing).

Or I leave London and search for somewhere better.

So that’s what I did, three months before my thirtieth birthday. It was right when, ironically, all those memes were coming out about how by the age of thirty you should be fill-in-the-blank.

‘By the age of thirty you should be the least financially stable you’ve ever been and embarking on the adventure of a lifetime.’

Cool. So now what?

It was quite terrifying. For someone who isn’t particularly spontaneous and is quite anxious it was a big move. Especially solo. Growing up we moved around all the time but this was different. This was me, at an age when society tells me I should begin to start having it all together, just pissing off.

Terrifying, but so exciting.

This blog is an attempt to bring along on the journey anybody who is interested. It’ll cover leaving London (including responses from everyone I told ranging from ‘um, what?’ to ‘hell yes, that’s brilliant’) to the motorcycle trip up to Scotland I’m currently embarking on and plan to continue for some time. I’ll also be documenting the trip on my Instagram (for anyone who hasn’t come here through a link from my Instagram).

Whether I settle down permanently or continue hopping around, existing in temp jobs and coffee shops, remains to be seen. I’m not really sure what’s next and I sort of like it that way (most of the time). As long as I am writing I don’t really mind.

Oh, and you’ll be pleased to know I’ve already started writing more. What’s that Ernest Hemingway quote: ‘In order to write about life you must first have lived it.’ 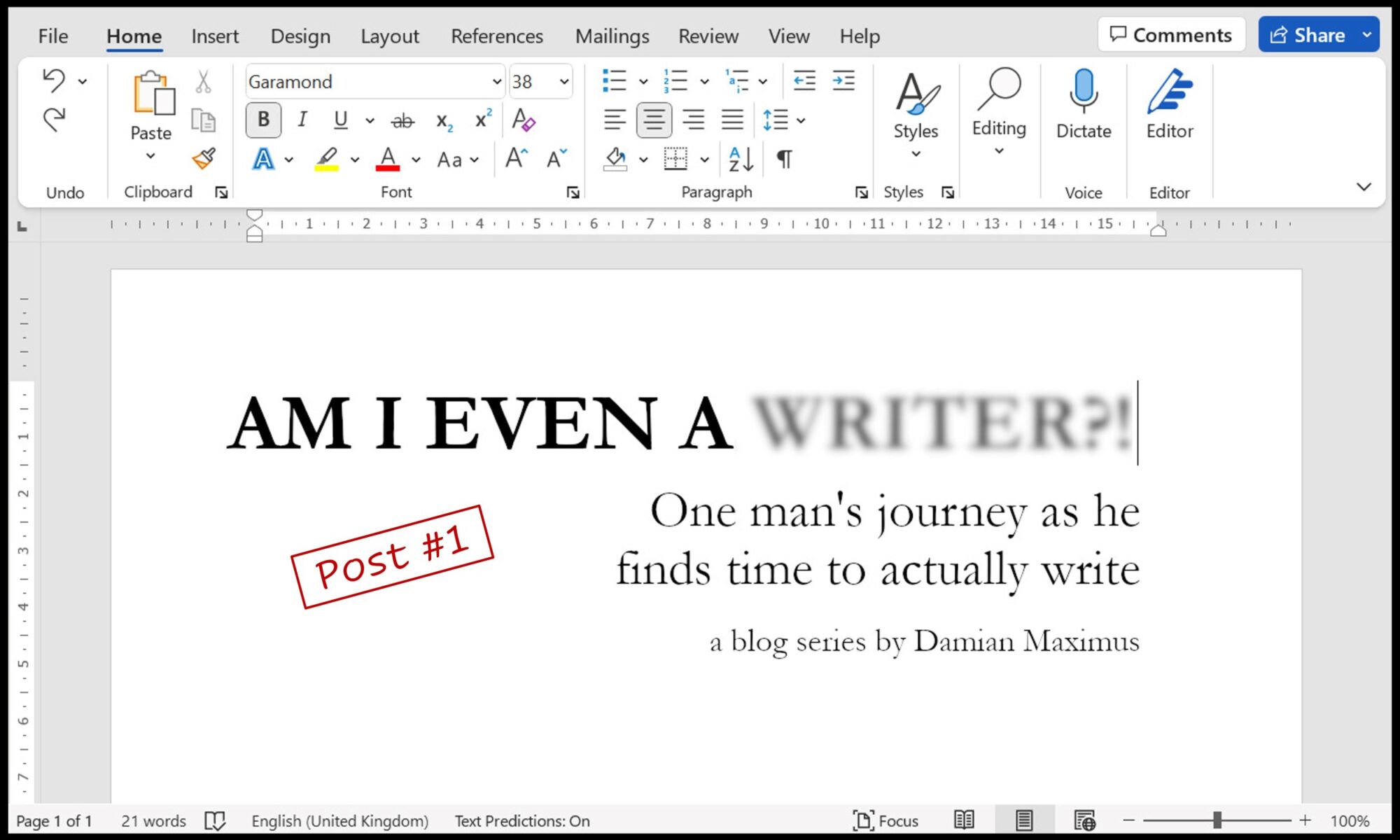 My name is Damian (that’s me in the funny hat) and I tell people I’m a writer.

But if I’m being honest I rarely find the time.

This is an attempt to remedy that.

To document the strange world of a writing life.

Born of an existential crisis, it begins with the miniseries Turning thirty, becoming nomadic where I, surprise surprise, turn thirty and become nomadic.

In the following posts you can expect: